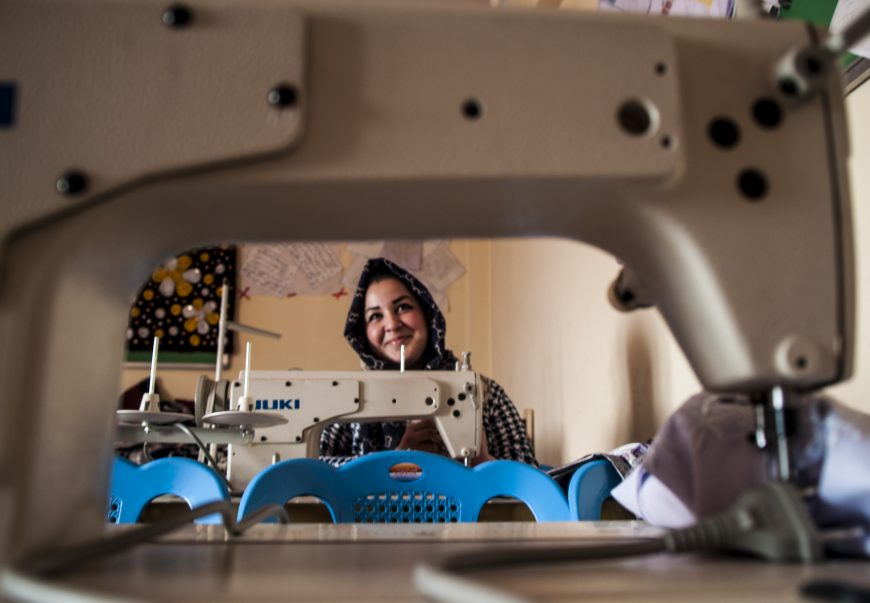 Since 2014, 1,360 Afghan women from minority communities in Mazar-e-Sharif have enrolled in life-transforming vocational trainings in one of ACTED’s Youth Development Centres (YDC).

Beyond providing the basics, such as access to health care and classes on literacy, the centre excels in nurturing entrepreneurship, supplying locally relevant vocations skills courses such as embroidery and computer classes, which improve women’s employment prospects and demonstrate their capacity to break out of traditional gender roles.

These schools help a lot: Girls are often only allowed to study until 9th grade, however the YDCs convince families that the higher level of education can bring economic benefits, while the girls get to stay at school for longer.

Afsana’s students often go on to enter university, particular impressive given Afghanistan’s wide gender disparity in tertiary education, with only 0.5% of girls from rural or marginalised backgrounds progressing beyond secondary school.

Far removed from the grey scenery of Kabul, Afghanistan’s locked down and shuttered capital, in Mazar-e-Sharif in Balkh province, northern Afghanistan, locals congregate late into the evening, hovering around small market stalls selling pyramids of oranges as the shadows grow over the turquoise citadel of the Shrine of Hazrat Ali. With no curfew or discarded barbwire to worry about, their path home will likely pass unmolested. All this portrays the sentiment, widely shared among the populace, that Mazar-e-Sharif remains a liberal hub of culture and commerce for the north; a kernel of the Afghan future. A new train line to neighbouring Uzbekistan promises to boost the town’s economic prospects further.

Towards Mazar-e-Sharif’s outskirts lies the frontier settlement of Nawabad Turkmania, an endless brown maze of single story houses and freshly-turned pasture, over which school children proudly parade their shiny new backpacks. Amidst this dusty maze stands ACTED’s Youth Development Centre, completed in 2015. Today, 54 women are cutting an enormous cake to celebrate their graduation from a nine-month computer skills class.

Among them is Naeema, an 18 year old from Mazar-e-Sharif. From beneath her deep green shawl, Naeema lays out her plans for the future: ‘When I leave I want to be a doctor here in Mazar-e Sharif. I want to do a service to my country. Why would I want to leave?’ she asks rhetorically.

Naeema accesses the courses on Microsoft Office and computer repair for free. The centre is close to her house and she says she often comes here just to read and relax. ‘My family is really happy that I take this class. They are very proud of me,’ said Naeema.

Naeema’s teacher, Sahar, also from Mazar-e-Sharif, said many of the girls go on to become teachers in their own right in a private capacity. ‘It is this improved earning power which motivates conservative families to grant their female relatives new liberties,’ said Feyza.

Upstairs in a large room, flickers of afternoon sun cut through ornate curtains onto a line of sewing machines.

Sahar has a reputation among the students of her embroidery class as a diva. One for whom the students play the role of studio audience before a star talent, as Sahar reels off her advice to the imaginary viewers at home.

Around us her students add beads to crimson fabrics mounted on wooden frames.

Sahar talks about social attitudes towards women. ‘Their families are strict and often do not let their women study or work, due to the sensitivities of the male members. But here, as the trainers are all female, this is no longer a problem.’