International and local humanitarian agencies engaged in Ukraine joined forces in Berlin for a one-day conference to draw attention to the forgotten humanitarian crisis in the east of the country, urging decision makers to commit to tangible improvements to the situation in eastern Ukraine.

An average of 40 conflict-related incidents are recorded every day in the 10 km-wide area along the line of contact alone. Recent developments have led to a further separation of the civilian population living on both sides of the line of contact. Almost four years since hostilities began in eastern Ukraine, human suffering is intensifying.

Concerned with the deteriorating humanitarian trends, the ACCESS Consortium (People in Need, Action contre la Faim, Doctors of the World/Médecins du Monde, and ACTED/REACH) is calling parties involved in the conflict, the international community and humanitarian stakeholders to take additional measures to ensure that critical humanitarian needs are met.*

With negotiations not resulting in a political breakthrough thus far, and funding for humanitarian aid at critically low levels—the situation is still at crisis level for the four million people in need of assistance. It is crucial that humanitarian needs are given appropriate consideration, and that all stakeholders share a common understanding of the situation on the ground in order to find realistic solutions.

To contribute to this objective, the ACCESS Consortium organized an international conference “Ukraine: A Forgotten Humanitarian Crisis in Europe?” that took place in Berlin on 22 November 2017. The event, supported by the European Commission , brought together local and international non-governmental organizations, civil society representatives, United Nations agencies, the European Union, donors, as well as governmental and political representatives for a constructive dialogue leading to a shared understanding of the humanitarian needs and best ways forward.

Speakers in the first panel provided an overview detailing major humanitarian concerns that are often not prioritized in diplomatic arenas, which tend to focus on security and political matters. “Fighting, the trade blockade, the disruption of access to basic services, all have contributed to increasing vulnerabilities. This is happening right at the doors of the European Union, in the conflict-affected area of eastern Ukraine, were today, for instance, 1.2 million people are food insecure—176,000 of whom severely”, said Šimon Pánek, president of People in Need, the lead agency in the ACCESS Consortium.

In the second panel, institutional representatives considered ways forward to break the humanitarian impasse. They showcased efforts underway from a variety of institutional perspectives— diplomatic negotiations among parties to the conflict, national strategic planning, and the European Union’s plan to ensure integration of future humanitarian and development programs for Ukraine. “The EU has been at the forefront of the humanitarian and early recovery response in eastern Ukraine from the beginning of the crisis”, said EU Commissioner for Humanitarian Aid and Crisis Management Christos

Stylianides. “We will continue to support those in need in Ukraine. We want to assist the most vulnerable groups and to support reform and development where it is possible”.

The military activity over the 2016-2017 period has remained stable (with periods of calm followed by localized flare-ups in violence). This is a clear sign that rather than changes in the environment, what has caused this deterioration in the humanitarian situation are the diplomatic impasse, the reduction of humanitarian funding, the slow recovery investments, and overall, the insufficient focus (both by authorities and international actors) on the needs and difficulties faced by the populations in the Donbass. What is needed now is a real commitment at all levels to alleviate the suffering of the people of eastern Ukraine.

* In May 2017, four major international organizations including People in Need (PIN), Action Contre La Faim (ACF), Doctors of the World/Médecins du Monde and ACTED in partnership with IMPACT Initiatives launched a new Consortium project called ACCESS to provide multi-sectoral humanitarian assistance for conflict-affected populations in eastern Ukraine. The project, funded by the European Commission aims to capitalize on each organization’s respective technical expertise in various sectors and to further improve relief response through better coordination and synergy. 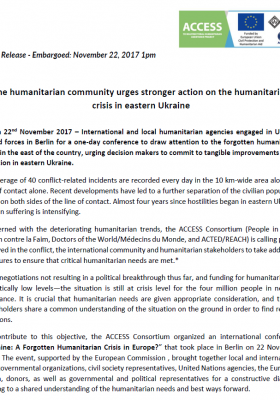 Mind the Gap! Conflict and industrial risks in Eastern Ukraine

Testimony from Ukraine during the Covid-19 crisis

Working in Conflict: The Critical Role Played by Enumerators

Ukraine’s ACCESS Consortium Committed to Reach 77,000 Civilians Affected by the Conflict in the East of Ukraine in 2021